Book Talks at HearthFire Books and Treats
Led by Rocky Mountain Literary Festival volunteers,  Book Talks provide
an opportunity to discuss the featured books prior to the Festival.

Check Back in March for the 2018 Book Talk Schedule 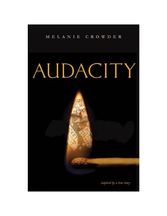 ​WEDNESDAY, MAY 17th 6PM
Audacity by Melanie Crowder
Leader: Joanna Lefave
​The inspiring story of Clara Lemlich, whose fight for equal rights led to the largest strike by women in American history. A gorgeously told novel in verse written with intimacy and power, Audacity is inspired by the real-life story of Clara Lemlich, a spirited young woman who emigrated from Russia to New York at the turn of the twentieth century and fought tenaciously for equal rights. Bucking the norms of both her traditional Jewish family and societal conventions, Clara refuses to accept substandard working conditions in the factories on Manhattan's Lower East Side. For years, Clara devotes herself to the labor fight, speaking up for those who suffer in silence. In time, Clara convinces the women in the factories to strike, organize, and unionize, culminating in the famous Uprising of the 20,000. Powerful, breathtaking, and inspiring, Audacity is the story of a remarkable young woman, whose passion and selfless devotion to her cause changed the world.

WEDNESDAY, JUNE 21st 6PM
Standing Outside of Life by Scott Gibson
Leader: Suzanne Dahlberg
​Twenty-seven-year-old Alexandra "ZeeZee" Hayward and her older brother, Mitchell, live in their childhood home, drifting aimlessly through existence. Mitchell works in a furniture warehouse, while ZeeZee is an assistant manager at the Gingerbread Cottage day care-a job with few challenges or demands. Theirs is a curiously isolated existence. The world, however, is about to intrude on the siblings' aimless routine.
​
A casual flirtation with the father of one of her day care charges plunges ZeeZee into a series of clandestine meetings-which become more problematic as she befriends her lover's soon-to-be ex-wife. Even as ZeeZee juggles her emotionally conflicted new relationships, she and Mitchell are blindsided by the return of their long-absent father. Mitchell's response is angry and unforgiving, while ZeeZee's initial hostility changes to curiosity about the parent she never knew. When Mitchell eventually tries to bribe their father into disappearing, ZeeZee wonders where her brother found the money. Is he connected to the series of armed robberies plaguing the town? And if so, what can a loving sister do about it? Told from ZeeZee's often bemused perspective, "Standing Outside of Life" recounts the pleasure, perils, and glorious messiness of learning to live.

WEDNESDAY, JULY 19th 6PM
Baker's Blues by Judith Ryan Hendricks
Leader: Cheryl Piderit
​​​In Wyn Morrison's world a 5 A.M. phone call usually means problems at her bakery--equipment trouble or a first shift employee calling in sick--annoying but mundane, fixable. But the news she receives on a warm July morning is anything but mundane. Or fixable. Mac, her ex-husband, is dead. Ineligible for widowhood, Wyn is nonetheless shaken to her core as she discovers that the fact of divorce offers no immunity from grief. Friends and family are bewildered by her spiral into sadness, Mac's daughter Skye blames her for his death. For the last several years Wyn has been more businesswoman than baker, leaving most of the actual bread making to others. Now, as she takes up her place in the bread rotation once more, she will sift through her memories, coming to terms with Mac and his demons, with Skye's anger, and with Alex, who was once more than a friend. Soon she will re-learn the lessons that she first discovered at the Queen Street Bakery in Seattle...bread is a process--slow, arduous, messy, unpredictable. It should be eaten with eyes closed and heart open.
​

WEDNESDAY, AUGUST 16th 6PM
The Emerald Mile: The Epic Story of the Fastest Ride in History Through the Heart of the Grand Canyon
by Kevin Fedarko
​Leader: Bert Newman
​From one of Outside magazine’s “Literary All-Stars” comes the thrilling true tale of the fastest boat ride ever, down the entire length of the Colorado River and through the Grand Canyon, during the legendary flood of 1983.
In the tradition of The Perfect Storm and Seabiscuit, the engrossing tale of the fastest boat ride ever down the Colorado River through the Grand Canyon.
​
A writer who has worked as a river guide himself and is intimately familiar with the canyon’s many secrets, Kevin Fedarko is the ideal narrator for this American epic. The saga of The Emerald Mile is a thrilling adventure, as well as a magisterial portrait of the hidden kingdom of white water at the bottom of the greatest river canyon on earth. This book announces Fedarko as a major writing talent and at last sets forth the full story of an American legend—the legend of The Emerald Mile.
​

WEDNESDAY, SEPTEMBER 13th 6PM
Among the Ruins by Ausma Zehanat Khan
Leader: Idske Hiemstra
​​On leave from Canada’s Community Policing department, Esa Khattak is traveling in Iran, reconnecting with his cultural heritage and seeking peace in the country’s beautiful mosques and gardens. But Khattak’s supposed break from work is cut short when he’s approached by a Canadian government agent in Iran, asking him to look into the death of renowned Canadian-Iranian filmmaker Zahra Sobhani. Zahra was murdered at Iran’s notorious Evin prison, where she’d been seeking the release of a well-known political prisoner. Khattak quickly finds himself embroiled in Iran’s tumultuous politics and under surveillance by the regime, but when the trail leads back to Zahra’s family in Canada, Khattak calls on his partner, Detective Rachel Getty, for help.
​
Rachel uncovers a conspiracy linked to the Shah of Iran and the decades-old murders of a group of Iran’s most famous dissidents. Historic letters, a connection to the Royal Ontario Museum, and a smuggling operation on the Caspian Sea are just some of the threads Rachel and Khattak begin unraveling, while the list of suspects stretches from Tehran to Toronto. But as Khattak gets caught up in the fate of Iran’s political prisoners, Rachel sees through to the heart of the matter: Zahra’s murder may not have been a political crime at all.

scholarships for local high school seniors in pursuit of their educational dreams.